The year 2018 saw the emergence and development of trends that are sure to impact politics in the U.S. and around the world — for good and for bad — for years to come. We asked some of our contributors to write about the ways 2018 will leave its mark on the world. It’s impossible to cover all the major events of 2018, but we hope this series will help provide some perspective on what’s changed in the past 12 months, what hasn’t — and what we need to do to come out fighting in 2019.

In part one of our series, Amy Muldoon looks at the stunning return of political job actions in the U.S., and Dorian B. writes about the victories for far-right forces that put them in positions of power around the world.

The Return of the Political Strike

Amy Muldoon | Strikes are back for U.S. workers in a big way — up from official statistics that recorded 25,000 people on strike in 2017 to just under half a million so far in 2018. And these strikes are getting the goods across industries: Starting with the “red state” rebellion of teachers in right-to-work states, workers have been winning significant raises in many contracts.

The dramatic rise in strike numbers is in part a result of the tight labor market giving workers more confidence to demand more from bosses and politicians. But recovering lost ground financially doesn’t tell the whole story. 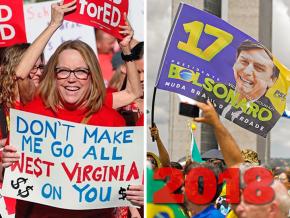 For example, 2018 was the year #MeToo walked the picket line. Women leapt to the front of the labor movement in every groundbreaking struggle of the year. In teaching, tech, fast food and hospitality, women led the way, bringing issues of sexism and social reproduction to the forefront — and proving wrong all the union bureaucrats who think that unity must be built on the most bland, economic basis when confronting capital.

Overall, 2018 was a much more political year for labor. The social role of teachers — and the role played by schools not just in educating our children academically, but shaping them socially, and in many cases providing them with necessary meals and emotional support — drew thousands of supporters into the red state rebellion, from West Virginia to Arizona.

Their success spurred teachers’ fights statewide in Washington — and, just this month, a one-day teachers’ wildcat in parts of Oakland, a 50,000-strong march for public education in Los Angeles led by the teachers’ union, and the country’s first strike of charter-school educators in Chicago, which included a demand for sanctuary schools for undocumented students.

Educators started the year speaking out against arming teachers in the name of “safety” and finished it taking a stand for migrant and refugee children held at the Southern border. Based on these trends, we can expect the Black Lives Matter in School week of action in February 2019 to be even larger and more impactful than this year’s, which involved hundreds of schools and won the endorsement of 20 teachers’ unions.

We asked contributors to write on the trends and events of 2018 that are sure to impact politics in the U.S. and around the world for years to come — for good and for bad.

Teachers aren’t the only ones who took part in political job actions. Legal workers in New York City stood in solidarity with immigrants being profiled in the courts. Tech workers at Amazon and Microsoft organized to end their companies’ contracts with ICE.

And in a dramatic job action against white supremacy, nearly 80 graduate workers at the University of North Carolina at Chapel Hill collectively withheld grades as the end of the semester neared — their protest helped to scuttle the school’s plan to build a $5.3 million “history” center that would have housed the Confederate statue known as “Silent Sam.”

The path is far from clear for workers who want to fight back. Labor laws favor the bosses more than ever in the post-Janus period, and union members such as New York City teachers and Columbia grad workers have to contend with union leaderships that prefer to rush through substandard deals.

Most notably, Teamsters boss Jimmy Hoffa Jr. was able to jam a bad contract down the throats of UPS workers, who showed the same spirit of resistance as teachers and hotel workers in voting down the union’s tentative agreement.

Nevertheless, 2018 showed that the class war finally has two sides — and that workers are eager to connect their fights for a just contract to wider struggles for justice. In 2019, socialists and other labor radicals need to strike while the iron is hot.

“When Mexico sends its people, they’re not sending their best. They’re sending people that have lots of problems...They’re bringing drugs, they’re bringing crimes, they’re rapists. And some, I assume, are good people.”
Donald Trump

“We need a mass cleansing, street by street, piazza by piazza, neighborhood by neighborhood. We need to be tough because there are entire parts of our cities, entire parts of Italy, that are out of control.”
Italy’s new Deputy Prime Minister Matteo Salvini

“Either they go overseas, or they go to jail. These red outlaws will be banished from our homeland. It will be a cleanup the likes of which has never been seen.”
Brazil’s incoming president Jair Bolsonaro

Dorian B. | 2018 saw the ranks of far-right leaders in positions of power grow to a frightening degree. Bigoted demagogues like Trump, the Philippines’ Rodrigo Duterte and Hungary’s Viktor Orban were joined in June by Salvini’s xenophobic, hard-right Lega — the fastest-growing party in Italy and junior partner in the new coalition government.

Then, in October, the election of the extreme-right authoritarian Bolsonaro to Brazil’s presidency marked a dark turning point for our side in Latin America’s most populous and wealthy country.

Across Europe, newly constituted forces of the far right are extending their influence and power from Scandinavia to the former Eastern Bloc. In Germany, a September poll placed the far-right Alternative for Germany party neck-and-neck with the center-left Social Democrats as the second-most popular party in Europe’s largest economy.

In France, Marine Le Pen’s National Rally (formerly the National Front) went through a period of turmoil following the 2017 elections, but its hateful politics remain dangerously popular, and the party could rebound in the context of the revolt against the neoliberal presidency of Emmanuel Macron.

Our Spanish comrades were hit with a terrible election loss this month in a regional contest in Andalucia, where the chauvinist, sexist, anti-democratic party Vox made the largest breakthrough for the country’s extreme right since the murderous dictatorship of Francisco Franco.

In the midst of all of these far-fight victories, a familiar character keeps rearing his ugly head. Steve Bannon may have left the White House, but his filthy, racist hands are seemingly everywhere — advising Bolsonaro’s campaign, rallying the European far right, and trying to overcome legal obstacles to knit together a Nationalist International of sorts.

Bannon’s home country may not have a neofascist party of its own, but the Republicans are working overtime to fill the void.

And while American fascists don’t have their own party, they might be even more violent than some of their global allies. Last year’s murder of anti-racist demonstrator Heather Heyer in Charlottesville, Virginia, was a horrible shock. This year’s massacre of 11 Jewish worshippers at the Tree of Life Synagogue in Pittsburgh was possibly even more horrible because it didn’t seem to be the same kind of bombshell.

2018 also saw important challenges against the far right in the U.S. — from this August’s anti-fascist rout of the Unite the Right 2 mobilization on the anniversary of Charlottesville to last week’s small but important national day of action against fascism and racism.

But these are only small initial steps toward stemming the far right tide, and we have a lot of work ahead of us.

It’s a daunting task, but we should remember that progressive, socialist reactions to the crisis of capitalism are just as inevitable as reactionary, fascist ones. As we look toward 2019 and beyond, the question is whether we can develop the kind of politics and organization over the long term that our movements need to win.

Material on this Web site is licensed by SocialistWorker.org, under a Creative Commons (by-nc-nd 3.0) license, except for articles that are republished with permission. Readers are welcome to share and use material belonging to this site for non-commercial purposes, as long as they are attributed to the author and SocialistWorker.org.