Brian Jones continues his correspondence with President Trump about the Civil War.

Dearest Mr. President of the United States of America:
Did you receive my last letter about Frederick Douglass? Somehow your response never made it to me. Sad.

I know you're busy. At first, I thought you would have plenty of time on your hands--for golf, letter-writing, etc. But now, I'm realizing that being the president is probably a lot harder and more time-consuming than I originally thought. Who knew?

Last year, I decided to read James McPherson's book on the Civil War Battle Cry of Freedom. Basically I wanted to read it because I, too, was asking myself, "you know, the Civil War--if you think about it, why?"

You've probably read McPherson. Heck, you probably could have written the book, and it probably would have been better and probably sold more copies and won even more awards.

McPherson wrote, "The slavery issue would probably have caused an eventual showdown between North and South in any circumstances." But, he wrote, "it was the country's sprawling growth that made the issue so explosive...slavery brought this danger to a head at midcentury." 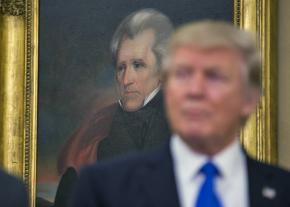 That is where you are right, and McPherson is wrong. Clearly, the Civil War could have been avoided.

What you meant, of course--which no one in the FAKE MEDIA appreciates--is that the war could have been avoided had the nation not been built on unfree labor of people kidnapped from Africa and their descendants in the first place.

Everyone knows the Civil War was a war initiated by the secession of the Southern states fighting to preserve slavery and expand it into the new territories. No slavery, no Civil War! You were so right--the whole thing could have been avoided!

EVERY DAY, I'm hearing more and more people say that you are callous, ignorant or racist. I guess these people didn't pay attention when you very clearly stated: "I am the least racist person." I'm sorry, but that case is closed, folks! You heard the man! "Least racist," by its very definition, means you cannot get less racist than Donald J. Trump.

These people just won't listen. They keep pointing at you for speaking up for racists in U.S. history like President Andrew Jackson--who owned slaves and ordered the genocidal removal of Native people from their homelands--and your appointment of contemporary racists and white supremacists such as Steve Bannon, Steven Miller and Jeff Sessions to prominent and powerful positions in your administration.

The media can howl all they want, but words speak louder than actions. Do these people not understand the meaning of the words "least racist"?

Would a racist president propose, as you did on the campaign trail, that you would do "phenomenally with the African-Americans," and then claim that those Black people who stayed home on Election Day were "almost as good" as those who voted for you?

Would a racist president put a highly qualified Black man like Ben Carson in charge of public housing?

Would a racist president promise that historically Black colleges and universities (UBCU) would be a priority in your administration? Sure, some pointy-headed intellectuals will point out that you are now arguing that federal support for HBCUs represents an unconstitutional form of "preferential treatment" for Black people. But this is just unfair. A fair assessment would have to be balanced with the fact that you took a photograph with several HBCU presidents in the Oval Office. Pictures speak even louder than words.

More than 48,000 people have signed a petition to rescind the invitation that Bethune-Cookman (an historically Black university in Florida, as, of course, you know) extended to your Education Secretary Betsy DeVos to speak at this year's commencement and receive an honorary degree. This petition claims that DeVos' statement that HBCUs were the "real pioneers when it comes to school choice" was offensive:

At best, this is an outrageous assertion that black students had opportunities to study where they chose; at worst, this is a failed attempt to use HBCUs to push an educational reform movement that continues to disenfranchise children throughout this country, especially in her home state of Michigan and specifically in Detroit.

I certainly do not intend to encourage more people to sign this petition by reminding them that the link to do so is campaigns.organizefor.org/petitions/betsy-devos-has-no-place-at-our-hbcu.

I am reminded of Abraham Lincoln's second Inaugural Address, when he embraced the war against slave owners:

[I]f God wills that it continue until all the wealth piled by the bondsman's two hundred and fifty years of unrequited toil shall be sunk, and until every drop of blood drawn with the lash shall be paid by another drawn with the sword, as was said three thousand years ago, so still it must be said "the judgments of the Lord are true and righteous altogether."

Material on this Web site is licensed by SocialistWorker.org, under a Creative Commons (by-nc-nd 3.0) license, except for articles that are republished with permission. Readers are welcome to share and use material belonging to this site for non-commercial purposes, as long as they are attributed to the author and SocialistWorker.org.